A New Way To Build Tiny Neural Networks Could Create Powerful AI On Your Phone, Neural networks are the core software of deep learning. Even though they’re so widespread, however, they’re really poorly understood. Researchers have observed their emergent properties without actually understanding why they work the way they do.

Now a new paper out of MIT has taken a major step toward answering this question. And in the process the researchers have made a simple but dramatic discovery: we’ve been using neural networks far bigger than we actually need. In some cases they’re 10—even 100—times bigger, so training them costs us orders of magnitude more time and computational power than necessary.

Put another way, within every neural network, exists a far smaller one that can be trained to achieve the same performance as its oversize parent. This isn’t just exciting news for AI researchers. The finding has the potential to unlock new applications—some of which we can’t yet fathom—that could improve our day-to-day lives. More on that later.

You may have seen neural networks depicted in diagrams like the one above: they’re composed of stacked layers of simple computational nodes that are connected in order to compute patterns in data.

The connections are what’s important. Before a neural network is trained, these connections are assigned random values between 0 and 1 that represent their intensity. (This is called the “initialization” process.) During training, as the network is fed a series of, say, animal photos, it tweaks and tunes those intensities—sort of like the way your brain strengthens or weakens different neuron connections as you accumulate experience and knowledge. After training, the final connection intensities are then used in perpetuity to recognize animals in new photos.

Observation #1. When a network is initialized before the training process, there’s always some likelihood that the randomly assigned connection strengths end up in an untrainable configuration. In other words, no matter how many animal photos you feed the neural network, it won’t achieve a decent performance, and you just have to reinitialize it to a new configuration. The larger the network (the more layers and nodes it has), the less likely that is. Whereas a tiny neural network may be trainable in only one of every five initializations, a larger network may be trainable in four of every five. Again, why this happens had been a mystery, but that’s why researchers typically use very large networks for their deep-learning tasks. They want to increase their chances of achieving a successful model.

Observation #2. The consequence is that a neural network usually starts off bigger than it needs to be. Once it’s done training, typically only a fraction of its connections remain strong, while the others end up pretty weak—so weak that you can actually delete, or “prune,” them without affecting the network’s performance.

For many years now, researchers have exploited this second observation to shrink their networks after training to lower the time and computational costs involved in running them. But no one thought it was possible to shrink their networks before training. It was assumed that you had to start with an oversize network and the training process had to run its course in order to separate the relevant connections from the irrelevant ones.

Jonathan Frankle, the MIT PhD student who coauthored the paper, questioned that assumption. “If you need way fewer connections than what you started with,” he says, “why can’t we just train the smaller network without the extra connections?” Turns out you can.A New Way To Build Tiny Neural Networks Could Create Powerful AI 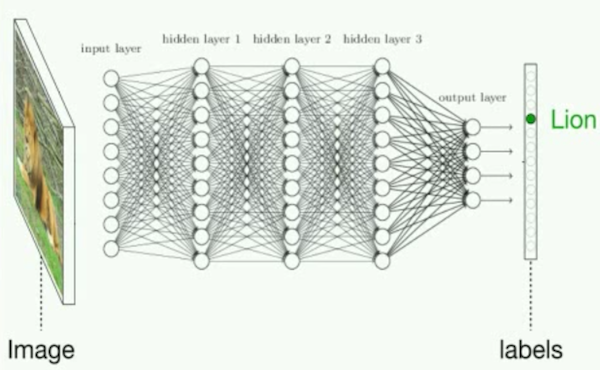 A diagram of a neural network learning to recognize a lion. JEFF CLUNE/SCREENSHOT