Artificial Intelligence Breakthrough: Magnet Networks ‘Mimic’ Human Brain Activity, Artificial intelligence (AI) built around the human brain can help robots and computers better understand the differences between objects. The applications of this technology could, for instance, help robots make on the fly decisions about which products to buy in a store. The AI breakthrough could also help robots make optimized decisions in route planning – an algorithmic conundrum is known as the Travelling Salesman Problem. The research was presented in the journal Frontiers in Neuroscience by researchers at Purdue University in Indiana, US.

Kaushik Roy, a Purdue professor of electrical and computer engineering, said: “Our stochastic neural networks try to mimic certain activities of the human brain and compute through a connection of neurons and synapses.

“This allows the computer brain to not only store information but also to generalize well about objects and then make inferences to perform better at distinguishing between objects.”

AI can use this to its advantage by making robots better personal assistants or by helping self-driving cars and drones be more efficient.

The researchers based their technology on experimental behavior observed in rat brains.

Professor Roy said: “The big advantage with the magnet technology we have developed is that it is very energy-efficient.

“We have created a simpler network that represents the neurons and synapses while compressing the amount of memory and energy needed to perform functions similar to brain computations.”

The veteran programmer and computer engineer spoke at the Purdue Idea Festival, which pondered the questions of AI and control over technology.

Mr. Wozniak expressed his doubts computers will ever truly catch up with the human brain.

He went on to say computers will forever lack the ability to solve problems in a strategic and deductive way, even if they do to considerably faster than humans.

He said: “Even if you had a computer that could do a billion million things a second it would never solve a problem that way, you need an approach to get there quickly.

“Human brains have always been able to do that.

“So, I’m not worried about the human brain being replaced for those decisions.” 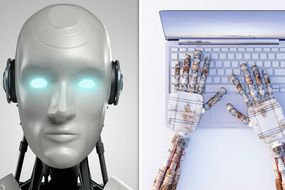